Only waking when a visitor arrived at your door

Making slipper socks for Hanukkah was your love language

Being alone never really suited you

Each time we’d bring my grandkids I knew it would

Replenish your vessel of love

Written for W3 Prompt #27 where Paula asks us to compose an acrostic poem using the word ‘NOVEMBER.’

Written for dVerse poetics. where our host, Mish, has asked us to write a poem commemorating a loved one we have lost, in the spirit of  Dia De Los Muertos, the “Day of the Dead”.

The chef decided to approach his rich friend to see if he would be interested in contributing his cash to expand the restaurant. To convince his friend to join in the new venture would not be an easy task. The chef knew he must be cagey about how he approached the subject of money. He decided to invite his potential investor to dinner on a very busy night to show how popular his restaurant was.

The special evening arrived. There was a new apprentice hostess at the front of the restaurant. Her face was covered with a silly grin. It was less than the professional greeting he wanted his benefactor to receive.  He couldn’t help but frown at the situation. The chef approached the hostess and politely asked if there was some other duty she could attend to when his backer arrived. He did his best to not insinuate that she was incompetent. To keep the peace, the hostess did not make a disturbance. When the chef signaled that his friend had arrived, the hostess retreated to the kitchen.

I work with ardor to keep myself from becoming entrenched in sorrow. I became a practitioner of meditation, a patient to specialists, and a client to mavens in order to manage my emotional well-being. But in the last few days, a thread of serious emotional heartbreaks has overwhelmed me. The yahrzeit candle burning out after seven days was a poignant reminder of my loss. I cannot control the waves of grief that come and go without my inviting them.  Numerous sad family matters have escalated, and my heart is hurting in more ways than I care to admit.

Today I needed a reprieve from my sadness. I couldn’t bear to wallow in my numerous unhappy thoughts. My original thought was to avoid my feelings by eating chocolate. I realized that would be a very temporary fix to a wider vat of emotions.

I could have sought out loved ones to talk to. But because I didn’t want to share my feelings with anyone, I looked for a chore to throw my energy into. I decided to clean out the shed beside my house. A mouse, or more likely mice, have taken up residence in the shed. Knowing this, I’ve kept my distance. Rodents disgust me. I donned gloves and a mask to begin the clean out. Disgusting is not a strong enough word for all that I found. I stuck with the chore for over six hours. Not once did I think about my sadness.

More than once, I thought I should stop. I knew my body would suffer in the long run. But I couldn’t. I was driven to continue until I had the shelves and floor clean. By the time I was done, I had filled up an entire trash bin. The next thing I’ll need to do will be to compact some steel wool in the small holes. I will also need to board up a larger hole the darn critters made.

After tossing out the mask and gloves, I showered in an attempt to feel sanitized. I also realized that I had not eaten anything or had anything to drink all day. (That’s not a very good way to treat my body.) I started my meal with an RX pain med. I knew what was coming. I made myself the same comfort food I’ve been eating for a couple of days. I made tacos for linner and prepared enchiladas for later. I did succumb to the desire for chocolate. BR rocky road ice cream was perfect after my linner. It was all I could do to wash up the dishes though.

After lunch and a nap, my body was screaming at me. I ached all over. I realized I had done this to myself. After all my efforts to reduce my pain, here I was back at square one. It wasn’t until writing this post that I began to wonder if I sabotaged my physical well-being to avoid my emotional needs.

I spent the evening in bed reading blogs. My dear friend called me, and I thought I was fine. Her kindness always amazes me. In the middle of our conversation, the waves came over me again. I was losing the battle to fight back the tears that wanted to burst from my eyes. I fear I upset her, which was not my intention. I hadn’t cried all day.

Unable to sleep, I read blogs. This is a healthy habit for me. I wanted to write a blog about what’s going on in my head right now. For no other reason than it’s therapeutic for me. It’s Valentine’s Day already. Maybe I should eat some of my dark chocolate covered almonds hiding in the back of the fridge.

In an attempt to get a grip on my feelings of the anniversary of my aunt’s passing, I knew I would need to move out of my comfort zone. I’ve been reticent  to leave my house for fear of risking my health. I’ve worked hard to protect my fragile immune system.  I’m still wary of the uneducated opinions  of the unmasked masses. I realized I had no choice but to mitigate my fears and allow  myself to honor my aunt.

Despite my concerns, I needed to respect the integrity  of my beliefs. My aunt deserved to have me follow our tradition.  The task  was to travel to the gravesite of my grandparents before visiting my aunt and uncle’s grave.

Before leaving my house, I voiced my affirmations  of love for my departed aunt. I stood staring at her picture sitting beside the flickering  flame of the Yahrzeit candle. I long to be a maven  of our family traditions. I feel that I will be the last one to honor our customs. While they are a visceral  part of who I am, my daughters don’t feel the same way.

As we entered the gates, we noticed two hearses parked on the left.  I was feeling deep grief for those people just beginning the difficult process of saying goodbye to their loved ones. In the year since my aunt left this realm, I have had to accept that the entire generation before me is no longer here. It is a difficult reality with an abundance of sadness.

We visited my grandparent’s grave first. Even with my forgetful  brain, I somehow remembered to bring the rocks to put on the headstones. There were masked workers  nearby attending to some gravestones. They gave us a nod of acknowledgement as we paid our respects. I felt grateful that they were masked, even though they were not close to us. (In the grand scheme of things, I know it wasn’t a top priority, but it crossed my mind.) I thanked my grandparents for all they gave me that contributed to who I am. The one thing I can thank bio-dad for is having incredible parents.

We then went to the northern  part of the cemetery where my aunt and uncle are buried. I was distraught at the appearance of their headstone. The space directly beside  them had obviously just been filled in. Someone else was experiencing a new grief of losing a beloved family member. A paper marker was placed where the headstone will be in the future.

I could not leave my family’s gravestone in such a state. I used my hands to work on clearing away the dirt and debris. My spouse went to the nearby sinks and brought over water and a paper towel. That made my task easier. It took three more water containers and many more paper towels to make the gravestone presentable. It felt I was completing an act of reverence by caring for their headstone.

After leaving the cemetery, we traveled to the beach. We had to go to two beaches in order to find a parking spot. The sunny day was perfect without too much wind. Despite the parking shortages, the beach was not too crowded. People were socially distanced which made me very comfortable. We watched as a couple of brave souls went far out into the water. One young dad kept running after his toddler son as he attempted to run into the ocean.  It was a heartwarming scene. We walked along the beach where the cold waves were breaking. We did get caught by a few unexpected swells. My spouse is not a fan of getting his shorts wet when he doesn’t have a change of clothes. It was joyful to be at the beach remembering to enjoy the life we have while we can.

After leaving the beach I insisted on going for BR ice cream. My aunt had a very strong metabolism. She could eat anyone under the table and never gain a pound. My spouse and I laughed at the fact that every time we would take my aunt and uncle to dinner, no matter how full everyone was, my aunt wanted ice cream before going home.  I know that my being a chocoholic is another thing that was a binding family tie.

The trip home was very difficult for me. Even with my medical seat cushion and back cushion, I was in the car for far too long. My body was in a great deal of pain, but it was well worth it. I was happy that I paid my respects, enjoyed being in nature, and felt safe. As I move past the first year without any members of my prior generation, I reflect on being the eldest generation now. I wonder what my children and grandchildren will cherish about me.

The juniors and seniors decided to add curtains to their student cave. They spent the money they’d saved all summer. Their counselor was amenable to their proposal. Their choice was a total disaster though. 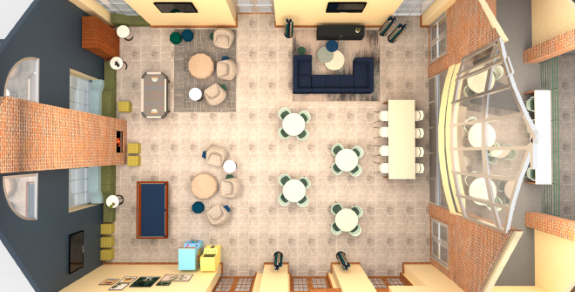