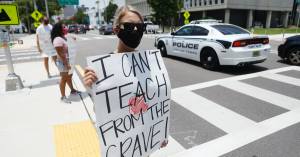 My little bit of fiction based on facts. Hopefully, common sense will come to the rescue.

Holy crud. How is this possible? We’ve worked so hard to keep the kids focused and on task. We’ve stuffed our lessons onto PowerPoint presentations so the kids can refer back if needed. We’ve pushed back when the admins said to give the kids busy work so they wouldn’t be too focused on the world news. We have flat out refused to jump down the kid’s throats who were struggling just to stay afloat. We’ve repeatedly questioned if there was going to be state testing this year. The answers were never clear. We are more than concerned with the blatant disregard for the health and well being of the students and staff. We stand together as educators. We know and understand that we must stay apart until we have a real handle on the virus.

Now they’re telling us we need to go back to the classrooms for state testing. Who forget to put on their common sense hats this week?

Rory is the creator of The Friday Four.
He says:  Today some more brain tickling thought provokers …

1) Do you ever simply stop and wonder ‘Where has time gone to?’ or is it something that never bothers you? I do wonder where time has gone, but I wouldn’t say it bothers me. I had no desire to retire from teaching. I enjoyed going to work each day, just to be with the students. I knew that when the cons, outweighed the pros, it would be time to retire. At my retirement luncheon I wondered where those 35 years had gone. I wondered how I made it to age 65. I had no regrets for my career, nor for my decision to leave it.

2. If you had a warning label, what would yours read? My warning label would read, “Don’t ask if you don’t want the whole truth.”

3. What fact amazes you every time you think of it? The fact that every new child born has the possibility to bring peace into the world.

4. What kind of activities do you enjoy doing and what would you never do?
I enjoy playing with Annie, working in my garden, sewing, blogging, talking with loved ones, learning new things, and scrapbooking.
There are activities I once wanted to do, but now I know this dilapidated old body could not handle it. I would not jump out of anything, climb to the top of anything, swim under anything, or consume anything bad for me.

What crazy twisted mind came up with the idiom, snug as a bug in a rug? Whoever “they” are, want us to envision these ideas: 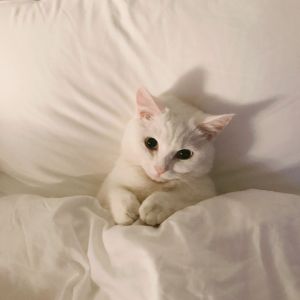 But sadly, my go to visual has always been this image. 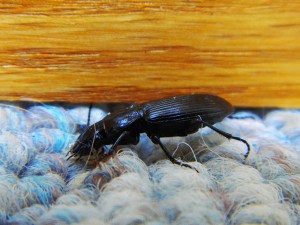 I never wanted to be that snug.

The first thing I do every morning now is pet Annie. She is typically on her bed beside me. Sometimes she is outside because the squirrels or other critters have alerted her to there presence. I assess my pain level to decide what I will be doing that day. I have to be honest that I often smirk at the knowledge that I don’t need to get up and prepare for work. Once retiring, it didn’t take long for me to not jump up and get dressed for work. It makes every day seem like a weekend.

At first I thought every day of retirement would feel like a holiday, but that isn’t the case. If it was holiday I would be spending time going places and seeing things and spending money. Even before Covid, that was not my style.

I am a morning person. I try to get something done every day early in the morning. Annie MUST be fed and played with of course. If I complete a chore before playing with Annie she lets me know that she does not approve. She stretches her body and does this weird yawn noise to get my attention. It is totally my fault, because once I retired I didn’t have to wait until coming home from school to play with her. She has me well trained.

I am happy that I have learned that if I do absolutely nothing, that is OK too. It just isn’t my norm. My day almost always includes time in my yard. I spend time watering, weeding, planting, etc. I have turned off the sprinklers because they waste too much water. Instead, I hand water the plants and trees in my planters. I have let both lawns die out. At some point, I will figure out what I want to do with them.

Getting out of the house first thing in the morning is an advantage right now. When I need to go  grocery shopping, I can be at the store when they open for senior hours. With the horrible numbers in LA County, I have amped up my safety precautions. I went to two stores yesterday morning and was on my way home in 30 minutes. I am back to wearing gloves and tossing them too. By 9 AM, I had laundry done, groceries in quarantine or decontaminated as best I could, played with Annie, and watered my plants.  I already felt like I had accomplished a great deal.

I, like many people, had a crazy upbringing. I was angry about it for many years. The majority of that anger is gone. I know it came from fear. There were some good times amidst the insanity though.

One of the highlights of childhood was visiting my grandparents. Their home was different from mine in more ways than I can count. The trait, if that is the word, I have been thinking about lately is religion. In my home we celebrated some Christian and Jewish holidays. Religion was never discussed.  I never entered a church unless on a rare occasion, I was invited by a friend. I knew I was Jewish, but I had no clue what that meant.

My mom, gratefully, made the trip a few times a year for us kids, to see my paternal grandparents. Even the cost of gas was a challenge for her at the time. I loved my grandparents. I was never “taught” about Judaism but in their home , I lived it. They were Orthodox and lived their beliefs.

I always knew I was in a special place when we arrived at their home. Their front door was the most beautiful door I had ever seen. It was like entering a magic land. The mahogany door with a curved top had a little door near the top that you could open to see who was on the other side. All of this was so special to me. I have a huge regret that as a youngster there were never pictures taken. It just wasn’t a thing.

From the moment you arrived at their front door you saw their mezuzah. Whenever we entered their home we touched the mezuzah and kissed that hand. My grandmother explained why in passing. It never felt like a “lesson.” It just felt right and I participated while at their home. We never had a mezuzah on our door jamb growing up. I liked what it symbolized but never thought to ask my mom why we didn’t have one.

The older I got, the more questions I had. At 12, I wanted  more of a connection with my Jewish heritage. My mom found a synagogue and I went to two “tween” functions. It was too late to assimilate with the group. Cliques were established and I was not meet with open arms. I never knew any Jewish guys. The thought of meeting someone Jewish was not on my radar.   (Much to my grandmother’s chagrin.)

When I met and married my children’s father, I knew he was Catholic and explained that I was Jewish by blood, but had not attended synagogue.  I never became a part of his religion. The funny thing was that he felt he “should” follow the religion, but never did.

The older I got, the more I sought information about my religion. Once no longer married to my kid’s dad, I began incorporating more and more of my heritage into my life. I lit Shabbat candles, I learned a few basic prayers, I celebrated Hanukkah, I put a mezuzah on my door jamb, I went to synagogue on some High Holy Days with my aunt and uncle, and I tried a variety of synagogues in my area.

I love and accept the variety of belief’s my family now choose to embrace. I have family members who are Ultra-Orthodox, Orthodox, Conservative , Reform, Messianic Jews, Christians, Jews by choice, atheists’, as well as Cultural Jews (which is how I define myself.) My acceptance of other people’s belief systems is simple. If you are acting in kindness and try not to harm anyone then whatever connection you have or don’t have with a higher source is your business.

From: My Jewish Learning
Denominations

Jews vary dramatically in their approach to Jewish traditions, laws and ritual observance. In the United States, the major religious streams of Judaism are Reform, Conservative, Orthodox and Reconstructionist. The Orthodox population is itself quite diverse, with numerous subgroups, such as ultra-Orthodox or haredi Orthodox (a group that includes Hasidic Jews), centrist Orthodox and Modern Orthodox. Many Jews do not identify with any one denomination, instead describing themselves as “nondenominational,” “transdenominational,” “post-denominational” or “just Jewish.”

So What Is Cultural Judaism? is a great explanation that resonates with me.

Ken Shapiro explains what a Jew is. This is so very well done. I recommend watching it.