Rabbi Altmann was sitting quietly in his study. He was a veteran to these bright  starry  nights. He enjoyed the silence as it helped him focus on his evening journaling. He wasn’t expecting visitors this evening, so when he heard bells ringing and a loud voice  laughing, he was a little worried.

The chatter continued. The Rabbi opened the closest window to his left and heard the gentle whiffle of the air. For some unexplainable reason he felt an instant synergy with the interloper.

In order to be a good host , the Rabbi invited the kind man in the crimson  suit inside. The Rabbi greeted  the gentleman and offered to bring him a steaming cup of hot chocolate. The Rabbi hoped to help fight off the frosty chill of the night.

The jolly man introduced himself as Sinterklaas. He then told the Rabbi; he could call him Father Christmas. Both men respectfully shook hands hoping to lesson the awkward situation.

Father Christmas began mumbling about being indignant  with his helpers. He had given them the freedom to use a computer to give him his naughty and nice list this year. Father Christmas was convinced that it was inevitable that something would go wrong. He didn’t like giving up the tried-and-true methods of the past.

Father Christmas looked around the Rabbi’s home. He was surprised that there was no mistletoe, no Christmas tree, not even stockings hung by the fireplace. Except,  Father Christmas felt a sense of real peace and happiness in this home.  The two sages sat exchanging stories for quite a while. They laughed, they shared common concerns about the state of the world, and they prayed for a hopeful future.

If you have doubts about this story, I am willing to certify  its authenticity. I had snuck out of bed, and witnessed the the whole thing. 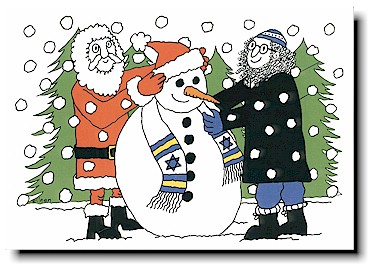 10 thoughts on “The Stranger In The Night”

Follow ❀ Welcome To LSS Attitude of Gratitude❀ on WordPress.com
Join 667 other followers