Sadje is the host of  Sunday Poser. She gives us the question and we thoughtfully answer. 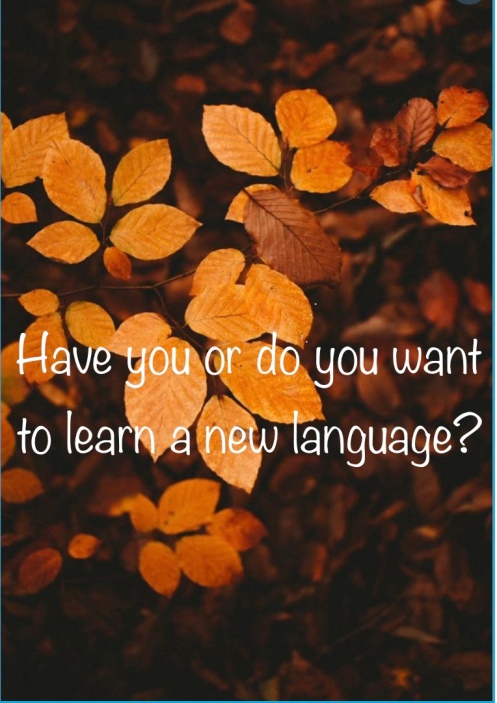 This is a question dear to my heart. For many years I was taught Spanish in school. I wanted to learn with all my heart. I took Spanish in 6th grade, 7th grade, 8th grade, 9th grade, and 10th grade. I also took Spanish in college for 2 years. I wasn’t very good at memorizing the verb tenses but usually could pick up on the base vocabulary. I had some terrific teachers as well as some trying ones.

One teacher in college stated that I had perfect pronunciation but a lack of skill in vocabulary. Not a surprise. You were not allowed to speak English in class unless you were totally stuck. The instructor asked me one day where my spouse was. (in Spanish) I was able to answer in Spanish that he was in his car driving home from work. I did not however, know the word for freeway. So instead, I said something to the effect that he was driving on the road where you don’t pay. She cracked up and told me the correct word.

Back in the day, I was often asked if I had musical ability. Whenever I confirmed that I had no musical ability, they would shake their head and tell me some detail about how the area of the brain that controls musical ability and the ability to learn a second language, are connected. Like most people at the time, I believed the common theory of the time. It answered my problem and made me feel not so stupid. Now, of course much more research has been completed questioning the accuracy of that theory.

I know I tried for years. I know I really wanted to learn. I could understand much of what was being said in my classroom, especially the bad words. (LOL) I can often understand conversations between people when they assume you don’t know what they are saying. I cannot speak complete sentences very well though.

As an adult, I took a class in Hebrew. Our Rabbi was fantastic. I wanted to learn more than anything. I made flash cards. I listened to tapes. I typed up notes. But it was very difficult for me. I must be honest, I dropped out admitting failure before the class ended. It was far more crushing to me than when I couldn’t learn in school. It meant so much more to me. I know it was not for lack of trying. I know my heart was in it.

I have accepted that for me, learning a foreign language probably isn’t ever going to happen. That is why I have such respect for those who can speak multiple languages. I always told my ESL students to be grateful that their parents gave them that gift. When a pupil would struggle for a word in English, or apologize for saying it incorrectly, I had an easy answer. I would tell them that they did a better job in English than I could ever do in their language. We would both laugh and move on with no embarrassment.