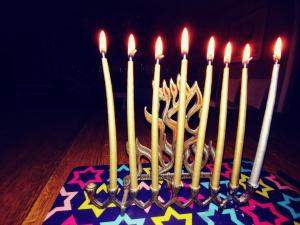 I should be making latkes. I am not because of Covid. I am the only one at home that eats latkes. It is very labor intensive, and worth every minute of it. The problem is that I would be eating them forever because I have no idea how to make a small batch. For the time being I am remembering the tastiness and reliving the aroma that filled the house. In my family we only ate applesauce with latkes. Never would you ever see sour cream as a side.
Mothers and daughters were always the focus on the 7th night. I included one possible reason below.

The following is from Tel Shemesh.
Tel Shemesh is a web resource for those who are attempting to integrate Jewish faith and practice with earth-based beliefs and ways of living.

Chanukah Ritual for the Seventh Night
This is the seventh night of Chanukah, which was known among the Jewish communities of Algeria, Morocco, and Tunisia as Chag haBanot or Festival of the Daughters.

This holiday of Chag haBanot was celebrated with feasts and sermons in honor of heroic women and with gifts and blessings for girls. Bridegrooms would give gifts to the young women who were engaged to be married to them. It was also a time when inheritances were passed down from one generation of women to another, and when girls who were fighting would reconcile.

This juxtaposition of the winter solstice with Chanukah and Chag haBanot is interesting because in Germany the winter solstice was once known as Mother Night (modrenacht). Mothers were celebrated on that night because the Great Mother was said to be giving birth to the sun at that time. As the solstice passed, the daylight would last longer and longer. This was understood as a rebirth of the sun’s light.

This image of “giving birth to the sun” is similar to the Chanukah candle ritual, in which one candle gives rise to one, then two, then more and more candles. In fact, the shamash or helper candle that lights the other candles is called “shamash” which means “sun.” Legends from the Book of Maccabees suggest that after the first exile, the Temple’s fire was rededicated on Chanukah. The miracle of the oil, the Talmud says, was that when the Jews repurified the Temple after the war with the Syrian Greeks, they found one small cruse of oil, enough for one day, and lit the menorah with it. Miraculously, it lasted for seven days. This cruse of oil is like the sun, whic, though it has diminished through the autumn, burns brighter after the passing of the solstice. The Temple, which is lit up by the miracle oil, is like the world that is lit by the sun.

Chag haBanot, which celebrates the link between mothers and daughters on Chanukah, seems to be similar in intention to Mother Night. It falls on the new moon, as the dark moon of winter shapes itself into a glowing crescent. As the year begins to turn back toward spring, women become the symbol of the newly strengthened light: the women of the Chanukah story, and of the Festival of the Daughters, are the mothers who give birth to the sun. (Perhaps this is why there was an Eastern European custom that women did not work while the candles were burning.)

Meditation: Seventh Night—Dedicated to “Advertising the Miracle”: The Light in the Window

As you stand lighting at the window, raise your eyes to look outside,
And behold a face before you, some curious passerby
And then realize it is your reflection, in the window glass, your own eyes
What have you seen in the window’s mirror; what miracle do you advertise?

The seventh night is dedicated to the window to the world. This is where the strength and purpose that I have nurtured within are celebrated in the sight of others. This is the show of lights that sparkles forth from self. It is the commandment of Chanukah to do pirsum hanes—“to advertise the miracle,” the miracle that was wrought in history, that is wrought within me.

May my eyes behold the miracles shining forth from each passing soul.
And as I gaze into their windows may my own miracle be beheld as I behold.

The content in this page is produced by Chabad.org, and is copyrighted by the author and/or Chabad.org. If you enjoyed this article, we encourage you to distribute it further, provided that you do not revise any part of it, and you include this note, credit the author, and link to http://www.chabad.org. If you wish to republish this article in a periodical, book, or website, please email permissions@chabad.org.

6 thoughts on “7th Night of Hanukkah”