I knew I needed an early start today as the weather is projected to be 105 F. So before my spouse was even out of the shower I was outside painting the caps on the numerous retaining walls in my back yard. I purchased the paint months ago and today was the day for me to complete the task. Typically when I work in the yard, at length, I tend to solve the world’s problems. At least in my head.

I’ve learned some people meditate on a walk or jog so I figured I could meditate while I painted. I brought over an outside chair, dressed in my painting clothes, and prepared to work. Realizing as of late that I am able to meditate better with planned noise, I found a two hour YouTube meditation. It was highly effective. As I worked on my chore I had my typical brain wanderings. I was disturbed early in the process by the awful squirrels running along the fence which drove my dog crazy.  Once they had escaped to the open area beyond my fence things calmed down. I then kept trying to remember the Huck Finn reference about painting. I wondered if someone in this day and age could be fooled into doing the tedious job. I actually enjoy painting, but boy am I messy.

It wasn’t long before I was in deep thought. This week I have been hearing ad after ad about Father’s Day. At different points in my life this holiday has brought sadness, wistfulness, and melancholy, but never joy.  I remembered the many many “father figures” that have been in my life. I was never connected to any of my stepfathers as a child except the first one. He was more a dad to me than my own father. So at the ripe old age of four when he would beat my mother, I decided I never wanted a dad again. These memories did not bring me tears this time. I just moved past them. Then I thought about stepdad number seven. While not perfect (no one is) he was the best thing that ever happened to my mom. I would not have believed that when I first learned of him. I went over to my mother’s house because it was my birthday and typically my mother would make a special dinner for me. Instead of having dinner I found a note on her kitchen table that said “Sorry I can’t be here for your birthday, I’ve gone to Vegas to get married.”  I had no idea who it was she was marrying this time. My only thought was oh well, here we go again. The first Father’s Day of their marriage I did not acknowledge his presence. I had not done so with any of the former men and did not feel compelled to do so. After a while I came to know this gentle man and to love him. As I was an adult when they married, I never felt compelled to call him Dad. But my fond memories of him were that he was good to and for my mom. For that I shall forever be grateful. I came to love him and the to love the way he accepted my children. K1 was always called pumpkin by him as a toddler. She decided to give him a name also. She named him Pickum. It wasn’t long before everyone in the immediate family called him Pickum. He is the only man I have ever made and purchased Father’s Days gifts for. These thoughts brought tears of thankfulness. My brain then went to his final days in this realm. He was always reading his Bible. I hoped it gave him peace. I wondered what his passing would do to my mom.

Then I went back to Father’s Day. I thought of my dear cousin who had an amazing Father and I feel her loss. My uncle was so kind and caring. I miss him so much. It wasn’t long until I was thinking about all the women I know who no longer have their fathers. I never had that gift of a loving dad. As much as I loved W, he was my mom’s husband, not my dad. So on this week before Father’s Day, I was still confused about my feelings. It will just be another day like any other. I don’t have a deep sense of loss. I don’t know what I feel.

My brain finally left the Father’s Day track and moved to thoughts of annoying critters in my yard. I check my phone and it had been two hours. I continued to paint until my phone died. Then I turned on the outside radio. Loving the music helped me continue with my chore. After three and a half hours I finished. Sadly it was not before my silly dog chased a squirrel and got white paint all over her paws.  So into the house for a clean up. The dog was not happy with her required shower. 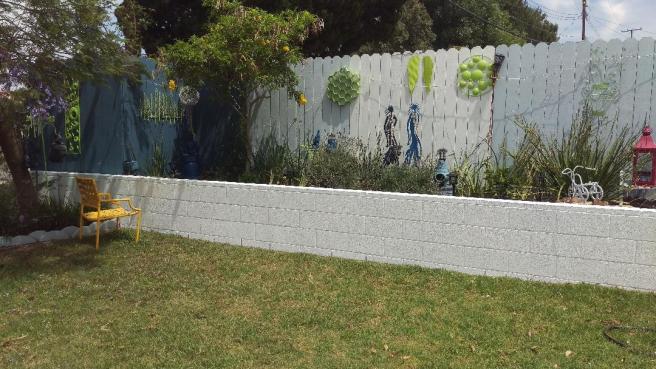